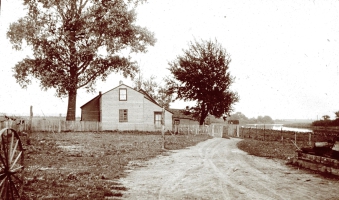 The Ton Farm Underground Railroad Site sits on the Little Calumet River at the southern edge of the City of Chicago. In 2020, the National Park Service recognized this as part of the Network to Freedom listing of nationally significant Underground Railroad sites.  In the years before the Civil War, this site was on a major overland route for fugitive slaves/freedom seekers walking or riding by coach or wagon from Chicago on their way to Detroit and Canada.  The Tons and other Dutch settlers assisted freedom seekers traveling through.

The Little Calumet River Underground Railroad Project is a volunteer group with leadership from across the south suburbs working with local residents and nearby institutions.  Our work seeks to reconcognize and connect with Black history right in our backyard.

We collaborate with neighborhood groups and multiple local historical societies, and with other partners including Openlands, Illinois State Historical Society, Field Museum of Natural History, and the Calumet Heritage Partnership.

The Ton site is on the grounds of the historic Black-owned Chicago’s Finest Marina located at St. Lawrence and 134th Place on the Little Calumet River.  It is important not only as a specific way station on the Underground Railroad, but also as part of the larger stories we are initiating through the “Little Calumet River Freedom Trail.”  Our intent is to solidify the public presentation of the Ton site and to build upon that to tell connecting Underground Railroad stories.